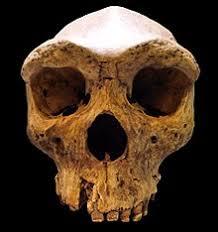 East Asians not Out of Africa, after all?

NatGeo is reporting on new research analysis of 4 teeth discovered 1972 and 1983 in the Tongzi county of southern China.  They were initially thought to be Homo Erectus.  Now new analysis shows they could be Denisovan, a hybrid or some other previously unknown hominid species.

One prominent Chinese paleontologist Xing Zhu exclaims “we don’t know where to put it.”

The finds have led two top anthropologists to suggest this may cause a rethinking of Eve Out of Africa, at least for the East Asians.

“We always think of Africa as the ‘cradle of humankind,’” says study author María Martinón-Torres, director of Centro Nacional de Investigación sobre la Evolución Humana in Spain. “I would say it’s a cradle of probably one of the human kinds, which is Homo sapiens.” But many human species once walked the Earth, and what is going on in Asia, she says, is likely “crucial to understanding the whole picture.”

Christopher Stringer of the London Museum of History chimes in:

“I think there’s something separate in China… I think we can say that.”

The new research comes at a time when a near perfectly preserved hominid skull from northern China is getting a second look. The skull is lending credence to the common Chinese anthropologists’ belief in separate origins.  Given the more recent date in Asia of 125,000 to 300,000, it raises an intriguing possibility of Homo Heidelbergensis having interbred with modern Homo sapiens in East Asia.

“A fossil skull of Homo heidelbergensis, an extinct species of humans, was believed to have been discovered in Northeast China and is considered to be one of the most complete fossils of ancient humans ever found, experts said. This is the first discovery of a Homo heidelbergensis fossil in Asia…

It has important scientific value for studying the origin of humans, considering Homo heidelbergensis is the common ancestor of Homo sapiens, Homo neanderthalensis and Denisovan, Ji said…