There’s a famous story in paleontology regarding the first ever discovery of Australopithecus robustus in South Africa, 1938.  A school kid, Gert Terblanche, would lead locals on guided tours of abandoned mines.  He’d occasionally run across fossils, and sometimes pawned them to tourists for a tip.  Robert Broom, a close friend and associate of the famous Raymond Dart, was given a tooth found by Gert.  He was astonished.  He quickly went to Gert’s school, in the middle of the day. Gert was in class.  He talked to the principal.  He let him in to speak with Gert, but on one condition: Broom was to give a one hour lecture on paleontology to his class.  Broom agreed.  Afterwards, Gert led Broom to the site where a skull and bone fragments of Robustus were found.

More on the story from efossils.org, Dept of Anthrolpogy, Univ. of Texas: 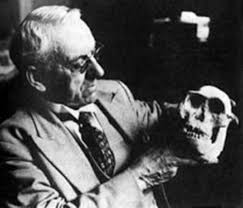 TM 1517 was discovered in 1938 by a local schoolboy named Gert Terblanche, who spent his Sundays giving tours at caves sites around Kromdraai, Blaauwbank River Valley in South Africa. When word of the fossil reached noted anthropologist Robert Broom, he tracked Terblance down at school and bribed him to lead Broom back to the site of the fossil’s discovery. Broom’s excavations produced more of the skull material, as well as some postcranial material. Broom assigned the specimen to a new species, Paranthropus robustus, based largely on the relatively robust face and teeth.

There was controversy in the upper crest English anthropology community to Broom naming the new find Paranthropus robustus.  Broom wanted it to be a separate species from Australopithecines.  Today it is generally accepted that Australopithecus robustus is in the same genus (*) as the more famous Australopithecus afarensis, discovered by his colleague Dart, the Taung child skull (which Broom is holding in the photo).

And now, a major announcement via YouTube from Wits University professor and National Geographic explorer emeritus Dr. Lee Berger.  He has just found a significant cache of hominid fragments, including a tooth in pristine condition.  The find is from W.S. 105 not far from the Rising Cave complex where Homo naledi was found. 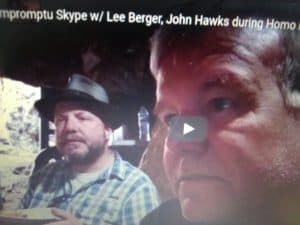 “I saw rock with brecchia that might be similar to that that surrounds the hominid fossils… it’s been extraordinary thing because literally the first block we were looking at, other than the hominid mandible, actually contained hominids, as well.   And it’s not the same individual…

The fact that it means, and I’m not going to understate this, means that we’re probably into an extraordinarily rich hominid site here.  It’s another big tooth individual… we don’t know what it is.  We kind of know what it’s not right now… it’s not Sediba… not Homo naledi.  Other than that we don’t know what species we’re dealing with other than a large tooth hominid. Very exciting though.”

Berger than goes live to the site, to his assistant Justin Zandile.  Justin explains in detail the process he is planning to use to extract the tooth and other fragments from the rock.  He then describes the tooth.

“This one is so big.  It looks like a Robustus.”

“I don’t know what species it is Justin. I can tell you it’s not Homo naledi.  And it’s way too big and the shape isn’t right, and the enamel is too thick to be Sediba. [Some are] attributed to Africanus… we also have big tooth Robustus. It’s a little hard to tell.  I’m going to hold my comments for now… we can begin to say what it’s not.  Ya know, it’s not Homo sapiens, it’s not Sediba, it’s not Erectus, not Homo naledi…”

Note – Berger is a professor emeritus at the same university of Raymond Dart – Witwatersrand. Of particular note to readers of this site, both Dart and Broom are still criticized to this day, for race realist views, recognizing modern human variation.

*Editor’s note – Very slight correction.  A paleontology student on Twitter objected to our use of “family” to describe Australopithecus robustus with Afarensis.  Technically, he is correct.  It’s Genus.