“its classification as Homo has been the subject of controversial debate since its first proposal in the 1960s.” — Don Hitchcock

Homo habilis, “handy man,” is so called because of the wealth of tools that have been found with its fossils. The average H. habilis brain was considerably larger than the average Australopithecus brain. The brain shape is also more humanlike. The bulge of Broca’s area, essential for speech, is visible in one H. habilis brain cast, indicating that the species may have been capable of rudimentary speech. The average H. habilis individual is thought to have been about five feet tall and 100 pounds, although females may have been smaller. — PBS.org 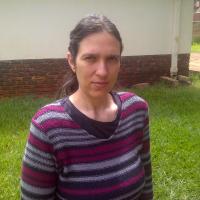 Homo habilis was the first hominin to have full facial expressions, yet it seems (as seen from recontructions of them in the Museo de la Evolución Humana, Burgos, sculpture by Elisabeth Daynes (2010) based on the KNM-ER 1813 cranium (Koobi Fora, Kenya, dated 1.9 Ma)), that Homo habilis already had developed a new system of facial muscles which were able to move differently than previous hominins. The skeletal structure may have allowed for more movement of some facial muscles in a specific modern way, closer to what later hominins were capable of, but not yet a fully developed emotional expression in the eyes. However, a possible emotional expression on their faces may be noticed from a specimen already from 1.9 million years ago. This reconstruction (photo at the link below), is a Forensic reconstruction of an adult female H. habilis by Élisabeth Daynès (2010), based on the KNM-ER 1813 cranium.

The hands of Homo Habilis

The dexterity of the hands of H. habilis already seems developed. We clearly see an efficient use of the opposable thumb, but we see this in other hominids as well. I am not going to look at the difference between a hominid that cannot (could not) hold a tool with the needed dexterity vs. a hominid holding the tool with the needed dexterity, but rather at which angle the hominid was able to hold and use the tool. Was this hominid able to figure out the best angle to make the tool work? Which plan B did the hominid have if the plan did not come together, etc? E.g. to chip the rock at the right angle to split off a part. I noticed that even us as modern humans sometimes could not figure out how to work with the flint, but it seems we either unlearned it or forgot. I think H.habilis was one of the steps in being smart with handiwork and some complex tasks until the next competitor came along.

There was more sexual dimorphism between habilis males and females. They may have developed some oval face shapes not previously seen in other hominin. Some with a finer mouth shape than the broad mouthed predecessors.

Christopher Stringer of the London Museum of Natural History suggests there could be a link to Australopithecines or to the more recently discovered Homo naledi, elfsciences.org, 2015,

The many mysteries of Homo naledi 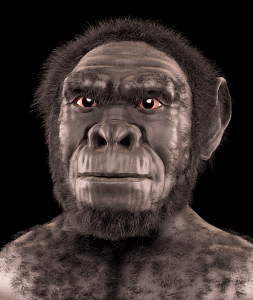 the small brain size, curved fingers and form of the shoulder, trunk and hip joint [of Homo naledi] resemble the prehuman australopithecines and the early human species Homo habilis.

It is too early to tell.  There is not, as of yet, enough fossil evidence.  And speculation on the matter evokes controversy.

Homo Habilis is the least similar to modern humans of all species in the genus Homo (except the equally controversial Homo rudolfensis ), and its classification as Homo has been the subject of controversial debate since its first proposal in the 1960s.

A most excellent article on the matter appeared in Royal Society Publishing – Biology, 2016, by William H. Kimball and Brian Villmoare.

From Australopithecus to Homo: the transition that wasn’t

It includes this quote from Louis Leakey:

It seems to me more likely that H[omo] habilis and H. erectus, as well as some of the australopithecines, were all evolving along their own distinct lines by Lower Pleistocene times. This would mean that their shared common ancestor must be sought in the more remote past and that when such examples of the parent stock are found they will not much resemble any one of the three subsequent branches.