Lee Berger promises major announcements including Homo naledi DNA and possible culture for the hominin species within the next 6 months.

Dr. Berger is the Phillip Tobias Chair of the Evolutionary Anthropology Department at the University of Witwatersrand in Johannesburg, South Africa.

From his bio, Britannica: 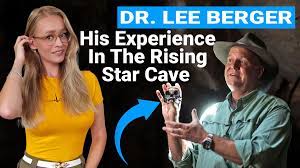 American-born South African paleoanthropologist known for the discovery of the fossil skeletons of Australopithecus sediba, a primitive hominin species that some paleontologists believe is the most plausible link between the australopithecines (genus Australopithecus) and humans (genus Homo).

In 2013 and 2014 Berger and colleagues excavated skeletal remains from a deep recess in the Rising Star cave system near the Swartkrans World Heritage Site in South Africa. The remains totaled more than 1,500 fossil specimens belonging to a new species that he and his team named H. naledi.

On January 22, Dr. Berger was a guest on the popular History with Kayleigh show on YouTube.  Kayleigh, from the Netherlands, regularly gets 10s of 1000s of viewers.  As Kayleigh mentions in this episode, her broadcast from April 2022, “Human Species That Doesn’t Fit In The Timeline | Homo Naledi,” gained an astonishing 598,000 views.  As she tells Dr. Berger, she’s been trying to book an interview with him ever since.

From the April 2022 broadcast:

“I think they had the use of fire” — Kayleigh, March 2022 broadcast

Quite presciently, Kayleigh at 21 minutes in says: 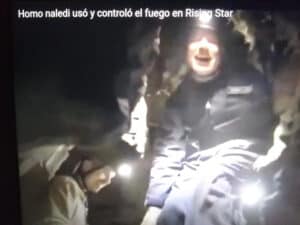 If Homo naledi entered the cave on purpose it is quite reasonable to assume that they controlled the use of fire, because there is no artificial light this deep in the cave’s system.  Although there is absolutely no evidence for the use of fire in both chambers, either they only used fire for a very short time, or they went inside on the use of touch as they wouldn’t be able to see anything… so I don’t believe that.  I think they had the use of fire.

Finally in the chamber with one companion (who appears to be Steven Tucker), Berger explored the area.  He looked up.  On the roof of the chamber, were soot particles, indications of fire use.

The entire roof of the chamber where we’ve spent the last 7 years working is burnt and blackened.

Utilization of fire for more than just illumination, “this changes everything that we believed before…” — Biological Anthropology PhD student José Luis Moreno

“So, uh, watch the molecular space…”

What It’s Like In The Dinaledi Chamber? Interview Lee Berger 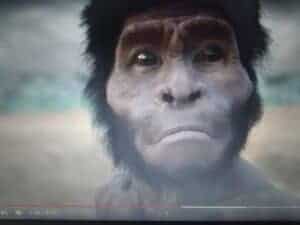 Kayleigh: You have been teasing the people with discoveries, bigger than the discovery of fire used by Homo naledi.  Can I ask you to tease the viewers a bit more.  Or, should we all wait til you are ready to announce this all yourself?

Berger: So, umm, I’m in London right now. That’s where I’m doing this video from. I’m on my way to Denmark, on Saturday morning.  If anyone in this field who does a little Googling can understand what happens in Copenhagen, and why we’re working there.

Note – From the description of the Max Planck Center in Denmark affiliated with the Max Planck Center in Leipzig, Germany where Nobel Prize winner Svante Pääbo, discoverer of Neanderthal and Denisovan DNA, heads the Genetics Research department: The field of biodemography, still relatively new, researches the relationships between factors that determine mortality and fertility of individual species, such as genetic disposition, environmental influences… 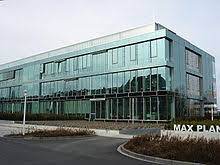 Berger continuing: So, uh, watch the molecular space. That’s fairly obvious.  We’ve been on the hunt for that.  Homo naledi is an ideal candidate, but not only that space.  Watch other spaces in the hominin record that umm… Obviously, molecular discoveries are going to be a big deal.

They are going to help us to truly understand, is Homo naledi related to us. Or, is it a separate thing. But also other discoveries… so I would watch the molecular space. That’s one area your audience should pay attention too.  And I think there’s going to be even bigger news than that. I know there’s going to be bigger news than that. The idea that we would never have Naledi culture… I think within the next year your audience will be enjoying a deep and astonishing level of understanding of Naledi culture.

Back in the mid-to-late 2010s, Homo naledi DNA was a pipe dream.  In 2017 Anthro-geneticist Dr. Jennifer Raff, best known for the discovery of 21,000 year old human footprints at White Sands, New Mexico, authored a piece in The Guardian,

Homo naledi genome: Will we ever find this elusive key to human evolution?

If we could get a genome from one or more H. naledi individuals, we could determine the phylogenetic relationship between it and the big-brained hominins: H. sapiens and H. neanderthalensis… This would tell us whether or not human populations had ancestry from this group (and perhaps others).

The answers to these questions might give us some insights into the social structure of the species…We could also use the molecular clock to estimate the time of divergence of H. naledi to the other hominins.

Ironically, at the time of the publication of that article, Dr. Raff noted, after conversations with Berger, and Dr. John Hawks:

Ancient DNA could answer a lot of questions regarding H. naledi’s ancestry and relationships, but unfortunately we’re not there yet.