Neanderthals weaponry not as efficient as Homo sapiens 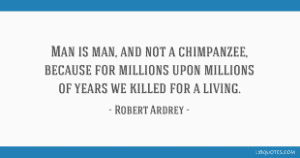 Have Raymond Dart, Robert Ardrey and other proponents of the Killer Ape theory, finally been vindicated?

African Genesis revisited: reflections on Raymond Dart and the ‘predatory transition from ape(-man) to man’ 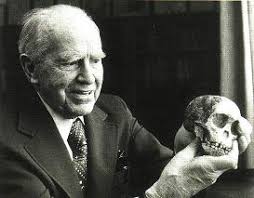 It is impossible to overstate Raymond Dart’s contributions to the field of palaeoanthropology. Not only did his 1924 discovery of the Taung child (Australopithecus africanus) verify Darwin’s prediction that Africa was the birthplace of humanity, but by the mid twentieth century he had also developed an influential hypothesis of early hominid behaviour. The ‘killer ape’ hypothesis, popularised in Robert Ardrey’s book African Genesis, contended that an inherent violence in early hominids propelled the evolution of our lineage. Australopithecus africanus was conceptualised as a murderous species… A more prosaic, but fundamental, component of the hypothesis argued that A. africanus was also a proficient hunter.

At least one line of Hominids, us, appears to have overcome all others because of our killer instincts. The headline at the UK Sun, Oct. 1,

Humans replaced Neanderthals because we had bows and arrows and they didn’t, study suggests

A team of Italian and Japanese researchers headed by Professor Stefano Benazzi, of Bologna University:

have found evidence that early homo sapiens were using spears, arrows and darts at least 40,000 years ago — 20,000 years earlier than previously thought. 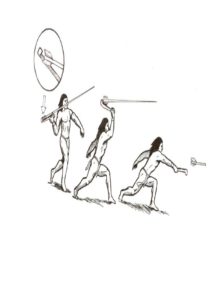 A team of Japanese and Italian researchers… have proven evidence of mechanically delivered projectile weapons in Europe dating to 45,000 – 40,000 years ago — more than 20,000 years sooner than previously thought. This study, entitled ” The earliest evidence for mechanically delivered projectile weapons in Europe ” published in Nature Ecology & Evolution , indicated that the spear thrower and bow-and-arrow technologies allowed modern humans to hunt more successfully than Neanderthals — giving them a competitive advantage…

Spearthrower darts, bows and arrows and other projectile weapons were used by Homo sapiens.  Neanderthals had only long jabbing sticks, which could prove effective at close range, but had limited value.

“Modern human migrations into Europe equipped themselves with mechanically delivered projectile weapons, such as a spear thrower-dart or a bow-and-arrow, which was a higher impact energy hunting strategy and offered modern humans a substantive advantage over Neanderthals.”

spectroscopic analysis of various residues found on several of the pieces demonstrate the spearheads and arrowheads were attached to the shafts of the weapons using a complex adhesive made from ochre, plant gum, and bees wax, further indicating their use in the hunting of prey.