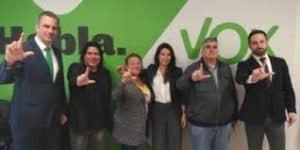 Libertarian Party Vox gains 24 seats, meets expectations with a full 10% of the vote

Description from the Washington Post, May 2, “How to build a Far Right Party”:

‘”Vox blazed across the Internet, dividing its own country while connecting with the far right in many others. Now it’s in parliament.

Opposition to Catalan and Basque separatism; opposition to feminism and same-sex marriage; opposition to immigration, especially by Muslims; anger at corruption; boredom with mainstream politics; a handful of issues, such as hunting and gun ownership, that some people care a lot about and others don’t know exist; plus a streak of libertarianism, a talent for mockery and a whiff of nostalgia — though it’s not quite clear for what: All of these are the ingredients that have gone into the creation of Vox.”‘

Some media tried to downplay Vox’s showing. But others were forced to admit, “they met expectations.”  The Party gained a total of 24 seats in Parliament, a total of 10% of the vote, making it the 5th largest Party.

Party spokesman Iván Espinosa de los Monteros declared that the “left are the extremists, not Vox.”  He also compared leftist media to the Nazis.

‘He tweeted a sneering congratulations to one Guardian journalist on his “PC-certified story.” He makes the same complaint about the Spanish media. “Congratulations El Pais,” he wrote recently, “for managing to put the expressions ‘ultraconservative,’ ‘ultranationalist’ and ‘extreme right’ in just five paragraphs. Goebbels would admire you.”’

Here is a list of the 24 new deputies from the far-right Vox party who have won a seat Spain’s Congress. One deputy Carla Toscano de Balbín described the women's movement in Spain as "a bunch of bitter, anticlerical, hate-filled, scruffy exhibitionists" https://t.co/B7h1aBsipx