“The March of Progress, properly called The Road to Homo Sapiens, is an illustration that presents 25 million years of human evolution. It was created for the Early Man volume of the Life Nature Library, published in 1965, and drawn by the artist Rudolph Zallinger.” (“March_of_Progress“ Wikipedia).

So many people, since then, have used this image to explain our origins, in both scientific, and layman ways. Even today, it is still the most recognized symbol of evolution in the world. No shade to The Leakey Foundation, whom I love, and donate to, but their logo is misleading even to what we now know about Hominid Evolution.

So scientists started to think, they figured they needed a better way to artistically express the pattern of Human evolution. So we had “The Family Tree” analogy that was introduced. This made a lot more sense to scientists and seemed much more probable.

The Family Bush, good, but not good enough 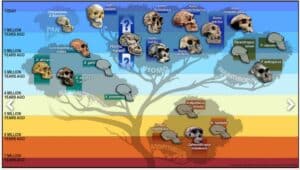 This model has worked until recently and is probably still one of the most accepted versions by anthropologists. It does a good job, but not a perfect one and it leaves a great deal to be desired. So what is a good model? What should we be looking at when we want to see our direct Hominin line?

As more and more fossils however make their way back to the surface of the Earth for the first time in thousands, sometimes millions of years. The more we learn, the more we can figure out what the past ecology of the area (Africa) was during the Pleistocene. But even this, still left information to be desired. With so many new species being discovered at what seems to be an incredible rate, we have to re-think how each human species has related to one another in the last 7 million years.

So what should we do? Is there a better model? Well, of course! In the last decade or so, a new term, and a new method of exploring and viewing our inter-connectedness is called the Braided Stream.

So what do we have here? In this image, we can easily depict that Human Evolution did not occur in a line or even a tree. But rather it intertwined with itself here and there, leading to dead ends, or lines of continuing evolution. We can see that species existed often in the same period, and even in the same places, where introgression occurred. 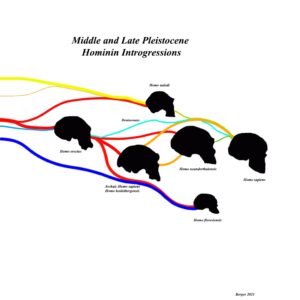 What is introgression? Well, let’s define that real quick before continuing, according to Oxford Dictionary, “the transfer of genetic information from one species to another as a result of hybridization between them and repeated backcrossing”. 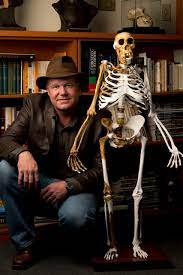 Thus, we can see not only genetically but morphologically how species shared features and evolutionary traits until we got some mixture that worked out better than any other and that’s how you get to where we are today!

So you may be asking, why is this so important? Why must we change how not only scientists and professors understand our evolution, but the layman as well. For the first time in history, as of this date, more than 50% of United States citizens “believe” in evolution. However, that does not mean they understand it. They rely on us, the scientists to make sense of it all and translate it from gibberish to easy to follow and digestible information!

The more we learn about our shared Human Origins, the more we will realize we are all one, we may come from different corners of the world, but we all come from Africa. We are all, Homo sapiens sapiens. Everything else, is well, extinct. We are the last ones left.

We did not evolve from monkeys, are chimps, we evolved from Hominids. There was no “March of Progress”, but a braided stream that is ever flowing in and out of itself. Species living and dying, features appearing and disappearing in the fossil record. It’s time to acknowledge that Human Origins is not just a straight line, but twisted, elusive, and mysterious.

Editor’s note – Seth was kind enough to ask us to run his piece, “help spread the more correct version of the human phylogeny, then please, feel free to share this article, for I think it is a good place to start.”  We are running it in full, with only very minor grammar and superfluous wording edits.

Please visit Seth’s wonderful site, World of Paleontology and be sure to tune into his show, usually once every two weeks, at YouTube.  Chris Stringer was a recent guest.  He’s also had on Agustin Fuentes, John Hawks and Lee Berger in the last 6 months.