The goal of abolishing the white race is on its face so desirable that some may find it hard to believe that it could incur any opposition other than from committed white supremacists.  — Noel Ignatiev, author, 2002, Harvard Magazine

On Monday, Secretary of State Mike Pompeo gently pushed back on changing American demographics in one of his final Tweets before leaving office. 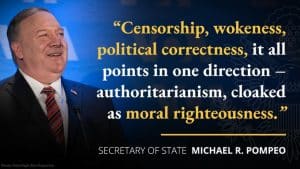 On his last full day as the top US diplomat and just one day after Martin Luther King Jr. Day, Secretary of State Mike Pompeo deemed multiculturalism to be un-American.

“Woke-ism, multiculturalism, all the -isms — they’re not who America is. They distort our glorious founding and what this country is all about. Our enemies stoke these divisions because they know they make us weaker,” Pompeo said in a tweet.

Republican Congressman Dan Crenshaw Re-Tweeted Pompeo.  As Fox News reports, Crenshaw got into a spat with the NY Times over their attacks on Pompeo.

Crenshaw continued: “NYT needs to stop pretending it is anything other than a DNC mouthpiece. And not even a very good one.”

The Texas congressman went on to praise comments Pompeo made at a speech last week during which the secretary of state decried “woke-ism, multiculturalism, all the -isms” as anti-American, sparking outrage among some left-leaning politicians and pundits on Tuesday. 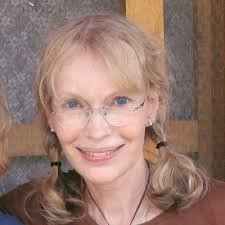 Both Pompeo, a US Navy veteran and Crenshaw, a Navy Seal vet, have come under increasing fire from far left-wing pundits and cable news talking heads, h/t complex.com.

Aaron Rupar @atrupar is a “journalist” with Vox.com:
Mike Pompeo is out here straight up saying that “multiculturalism” is bad
Actress Mia Farrow Tweeted out:
Other than Native Americans (sic), we are all from other countries & cultures…
Note – “Native Americans” of course are Beringians, immigrants from Siberia, having crossed the Bering Land bridge 14kya.
One Blue Check Twitter user Sulome Anderson even accused Pompeo of being a “white supremacist.”
Subspeciest.com reached out to over 20 Blue Checks on Twitter including Ms. Sulome, asking them if they would support Multiculturalism for African, Asian, Midle East, Oceania and Polynesian countries. We asked if their push for multiculturalism is limited to just indigenous white homelands. Not a single one responded.
0 LovesLove Ethno-States No Comments