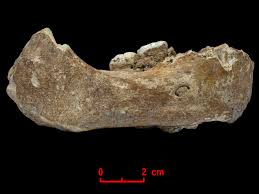 Chinese anthropologists have been saying for decades that the Han are direct descendants of Homo erectus.  Western anthropologists, most famously Dr. Alice Roberts, have challenged that assumption.

Svante Pääbo seemed to agree with the Chinese and added an intriguing possibility; Denisovan and Homo erectus hybrid:

Now a prominent New York based Anthropologist is leaning towards the Paabo and Chinese anthropology line.

“In Asia, there have long been claims for continuity between archaic and modern humans because of some shared traits,” observes [Shara] Bailey. “But many of those traits are primitive or are not unique to Asians. However, the three-rooted lower molar trait is unique to Asian groups. Its presence in a 160,000-year-old archaic human in Asia strongly suggests the trait was transferred to H. sapiens in the region through interbreeding with archaic humans in Asia.” [Emphasis added]