Dr. Marina Elliott, is a biological anthropologist from Canada.  She is also a professional cave explorer.  Her PhD is from the Simon Fraser University in British Columbia.

Dr. Elliott is also a long-time friend and member of the Lee Berger team exploring and researching Homo naledi in South Africa.  She is part of the “underground astronauts” team that frequently explored the Rising Star cave system chambers. In early July she was a guest on Seth Chagi’s World of Paleontology.  A few minutes in the interview, Chagi surprised Elliott with a pointed query.

Chagi: Correct me if I’m wrong.  Now this could have changed with the discovery or re-discovery of the Harbin skull [Homo longi in China], there is supposedly a fourth ghost DNA, in our sequences.  What are the chances, or is there any thought that it could be Homo naledi considering the time range?

Elliott: Wow.  [Pause] Excellent question.  You know, it’s possible.  But I’m very much an evidence based scientist.  So, possibilities are one thing; having evidence for something is another.  So, at this point we don’t have any evidence to say one way or another, but what we do know is that in modern human DNA we have some representation depending on what group you’re looking at, of Neanderthals…  we have elements of Denisovan DNA.

We have other elements, and we have these ghost genes, that really are big question marks for us, as far as where they came from and how they came to be, and our genetic material…  The DNA analysis may be at them eventually.  It’s certainly intriguing…  We may never know.

Dr. Elliott went on to explain how the Lee Berger team has tried to get DNA a couple of times out of the Homo naledi fossils from both the Dinaledi and Lasedi chambers, and have failed both times.  Although, she does mention new and promising protein analysis from sediments.

Dr. Elliott addressed this very topic in a 2017 paper, co-authored with her partners Lee Berger of the University of the Witwatersrand, South Africa and Professor John Hawks of the Univ. of Wisconsin. Elifesciences.org:

One analysis of craniodental evidence places H. naledi amid the branches leading to H. habilis, Au. sediba, and H. rudolfensis, suggesting that its anatomical pattern may have been present from the earliest origin of Homo. Another analysis has placed H. naledi as a sister taxon to archaic species of Homo and modern humans, closer to living humans than H. erectus. If this is true, an early H. naledi population may have been the ancestor of humans, placing H. erectus as a side branch. 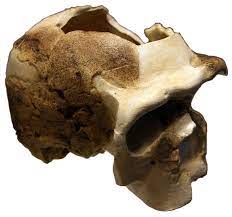 H. naledi is clearly a primitive species within the genus Homo, despite sharing many derived features with archaic and modern humans…

A species like H. naledi might well have given rise repeatedly to other branches of Homo, each derived in a somewhat different way.

The Homo naledi fossils have now been dated within 236,000 and 335,000 years old.  That puts them well within the range of archaic Homo sapiens.

Note – the oldest known archaic Homo sapien fossils – Jebel Irhoud in Morocco and the Herto fossils in Ethiopia – date from 320,000 years and 160,000 years ago.

There is another intriguing possibility as noted by Berger, Hawks and Elliott in their 2017 paper: Some previously discovered Hominid fossils in southern Africa may have been misidentified, and could be Homo naledi.

without further comparisons we cannot rule out the possibility that these fossils may themselves represent H. naledi.

They mention the famous Kabwe skull (Broken Hill from Zimbabwe). But another Hominid may be a stronger contender.

The Lake Ndutu [Photo] cranium is the only other subequatorial cranial specimen thought to be between 780,000 and 200,000 years old, but it also lacks secure provenience or a direct geological age estimate.

Some have suggested that Lake Ndutu loosely identified as Heidelbergensis, could actually be Naledi. If so, a 200,000 year old dating could extend the time frame further for Naledi and Sapien being contemporary species. 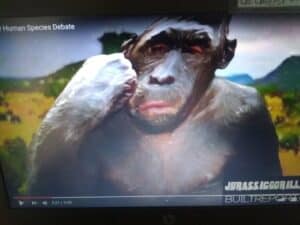 Josh Akey at the University of Washington in Seattle, Sarah Tishkoff at the University of Pennsylvania and others have spent years sequencing and analysing the genomes of modern Africans who belong to groups with deep ancestral roots, including the Baka hunter-gatherers from Cameroon, and the Hadza and Sandawe from Tanzania.

Within these genomes, they have found stretches of DNA that appear to come from another hominin species.

by the team’s calculations, this [introgression] probably happened within the past 30,000 years.

Chris Stringer believes the ghost species to be Homo heidelbergensis.  Or, it could be Homo iwoelerueensis

Who these “African Neanderthals” were is a mystery. One clue could come from a fossil that Stringer worked on for his PhD back in the 1970s: the Iwo Eleru skull from Nigeria.

If small-brained Homo naledi is admixed only with Africans, “there’s going to be a stigma attached” — Marc Anders

But another candidate is Homo naledi.  Of note:

it is possible that physical remains of this ghost have already been unearthed. One candidate is Homo naledi, a species discovered in 2013 deep inside a narrow cave system in South Africa. The fossils are around 250,000 years old, but no one knows how long the species survived.

That would extend the range of time for introgression between Homo naledi and Sapiens to up to around 300,000 years.

Multiple waves of Homo sapiens left Africa between 45,000 and 85,000 years ago.  A later date for Homo naledi survival in southern Africa would suggest the possibility of introgression with Africans left behind.

Scientists are finding news species that we never knew about.  Humans are top of the ladder.  That there’s no variation, right. Now we’re finding out there’s all kinds of variations.  It wasn’t linear progress. There are all these branches. The problem is in the word Species.  Because when a person mentions Denisovans, Homo naledi or Neanderthal, saying that they have a percentage of these other species, even though we know Neanderthal had a larger brain than humans, some of these don’t [graph of Homo naledi] and there’s going to be a stigma attached.