A study released in late 2019 received little attention, but had profound implications for solving the puzzle of Sub-Saharan African admixture with archaic Hominids.

Note – Putative Ghost Haplotyes abbreviated to PGH is a fancy way of saying, genetic line from an unidentified archaic Hominid species, could be Homo ergaster (Afro Erectus), some variety of Heidelbergensis or Australopithecus. 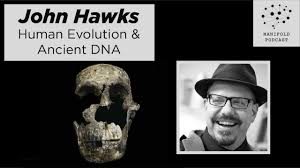 As anatomically modern humans migrated from Africa, they came into contact and interbred with archaic human groups. Non-Africans are estimated to have inherited about 2 percent of their DNA from Neanderthals, while Melanesian and aboriginal Australians have inherited about 4 percent to 5 percent of their DNA from Denisovans, and yet other populations…

Note – As we’ve chronicled here at Subspecieist.com, the actual percentage of Neanderthal DNA in Euro-ethnics could be as much as 6%.  Additionally, as stated above, aboriginal Australians have significant DNA from archaic ghost species, could be Homo erectus.  There is some speculation it could be a third-branch of Denisovan.

The avg number of PGHs was “much higher” between 5 and 15 times, among Sub-Saharan Africans

To study this, Jeffrey Wall, a researcher at the University of California, San Francisco and his colleagues used a dataset of genomes from more than 1,600 individuals from across the globe… the researchers found evidence of such admixture among sub-Saharan African individuals based on a linkage disequilibrium approach.

The researchers considered the long, diverged haplotypes they found as candidate regions for archaic human introgression and dubbed them “putative ghost haplotypes,” or PGHs.

The average number of PGHs, they noted, was much higher — between five and 15 times — among sub-Saharan Africans than non-Africans. It was also higher than the researchers had expected based on simulated datasets. [Emphasis added]

Could that PGH be Australopithecus Afarensis?

More and more evidence is emerging that Australopithecus Afarensis was contemporary with modern humans.

75 kilometers from Morocco’s west coast. With its big brain but primitive skull shape, the skull was initially assumed to be an African Neandertal…

geneticists date the split of humans and our closest cousins, the Neandertals, to at least 500,000 years ago, notes paleoanthropologist John Hawks of the University of Wisconsin in Madison. So you might expect to find hints of our species somewhere in Africa well before 200,000 years ago, he says.

Archaeologist Daniel Richter of the Max Planck in Leipzig used a thermoluminescence technique to measure how much time had elapsed since crystalline minerals in the flint were heated by fire. He got 14 dates that yielded an average age of 314,000 years, with a margin of error from 280,000 to 350,000 years. [Emphasis added]

In the Lasedi chamber [Rising Star cave system in South Africa] we recovered the really impressive skeleton of an individual of Homo naledi, which we named Neo, in addition to parts of at least two additional individuals… our work to date the site took some time… directly from the Homo naledi teeth themselves… to narrow down the range of dates for this hominid sample to between 236,000 and 350,000 years ago.

For a hominid that has a brain a third the size of brain of ours in Africa, this was very surprising to us.