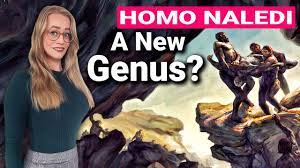 The path of human origins then gets a little fuzzy.  It is called the “muddle in the middle.”  The fossil record is sparse between 2 to 3 million years ago.  And the position of Homo habilis during this period is controversial.  Things start to clear up around 1.9 million years ago with the emergence of our direct ancestor Homo erectus.

Australopithecus sediba is generally considered by experts to be the last of the Australopithecines.  Au. sediba was discovered by Lee Berger of the University of Witwatersrand (pronounced – Vit-vaters-rand), and his son Matthew in at the Malapa cave site northeast of Johannesburg in 2008. 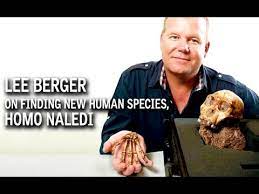 Australopithecus sediba’s mixture of primitive traits found in other australopithecines and derived traits also found in Homomakes the evolutionary position of Au. sediba an interesting question. Similar to other australopithecine species, Au. sediba is small in size, with long arms and small cranial capacity. Its features are more derived than those of Au. anamensis and Au. afarensis. Australopithecus sediba bears a strong resemblance to Au. africanus, a fossil species that is also found in South Africa. They have similar skull, facial and dental features… The combination of similarities and differences led Berger and his colleagues to conclude that Au. sediba was descended from Au. africanus.

The date range for Australopithecus sediba is still undetermined. At present, based on the current fossil evidence, Australopithecus sediba is dated to ~1.9 to 1.8 million years ago.  Berger and team have only the fossils from the one site to go on.  Fossils recovered from two individuals dubbed MH1 and MH2, include clavicle (collar), cranial, dental, pelvic, ribs, femur, forearm, vertebrae, a partial mandible (lower jaw) and a nearly complete hand.

Australopithecus sediba and the earliest origins of the genus Homo

With the recent publication of significantly more elements, and more detailed studies of these fossils, it is clear that Au. sediba is an unexpected addition to the early hominin record. With its small but in some ways derived brain, reduced dental size and incipient nose among other characters, the cranial morphology of this species appears to share features with both more primitive australopiths and later Homo…

Paleo-anthropologists have considered the possibility of Australopithecus sediba could be on the ancestral pathway to modern humans.

“On temporal grounds alone one cannot dismiss the possibility that A. sediba could be ancestral to the genus Homo” 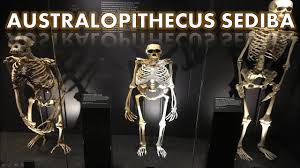 Au. sediba is distinct from both Australopithecus africanus, with which it shares close geographic proximity, and from early members of the genus Homo (e.g., Homo habilis) in both East and South Africa; yet, it also shares features with both groups, suggesting a close evolutionary relationship.

This larger picture sheds light on the lifeways of Au. sediba… a major transition in hominin evolution, that of the largely ape-like species included broadly in the genus Australopithecus to the earliest members of our own genus, Homo.

But does another possibility exist?  Au. sediba surviving well into the Middle Pleistocene, contemporary with early modern humans?

History with Kayleigh is well-known to regular readers of this site.  Back in April she produced a 20 minute video attacking Subspecieist.com for our article on Homo sardiniensis.

Kayleigh, who hails from the Netherlands, has one of the top YouTube channels on paleo-anthropology, with 91,000 subscribers.  Her videos regularly receive 15-20,000 views.

In one of her newest videos, she floats a unique hypothesis that even some of the most well-known veteran paleo-anthropologists have avoided, or perhaps, not even considered. Did a late Australopithecus survive until the dawn of Homo sapiens, 300,000 years ago?  If so, the obvious candidate would be Australopithecus sediba.

Homo Naledi Is A New Genus? Where Do They Fit?

Of all the species Homo naledi is clearly the most divergent of them all. Which again baffles scientists.  It has traits similar to Australopithecus afarensis, africanus, Paranthropus bosei, Paranthropus robustus, while at the same time sharing many similarities with earlier and later species like [Homo] erectus and [Homo] habilis.  And sharing quite a high number of traits, with Homo sapiens from the middle to late Pleistocene.  It’s baffling.  So, from looking at the samples it is clear that Homo naledi most closely resembles the species in the homo genus…  Homo naledi, why do you make it so difficult for us.

So for now, it has to be put into the Homo genus.  Unless, and this is a fun one, and I really like this. Unless we discover evidence of an ancient Australopithecus or Paranthropus species that managed to survive into the Middle Pleistocene. If that were to happen it would change the entire perception that we currently have of Homo naledi…  we need to keep open-minded, to the possibilities.  Stranger things have happened in the past.